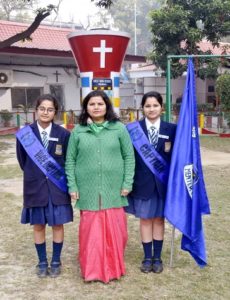 “Don’t let the fear of losing be greater than the excitement of winning.”
– Robert Kiyosaki

The colour blue signifies loyalty, wisdom, intelligence, faith and confidence. The Arthur House popularly known as the Blue House emblematizes every single of the aforesaid virtues in its truest sense. The session began with the Installation Ceremony held on 13 th August where I took the oath to carry forth the responsibilities of being a captain and to always keep the flag of Arthur House flying high. The school organized a number of co-curricular activities. Starting with, the Inter House Swimming Competition on 3rd September, 2019 in which our swimmers bagged a good number of medals. Though we came third, our swimmers Ananya Jaiswal, Ashadia Fatima Rizvi, Arushi Singh and others gave a tough competition to their competitors of other houses. In the Inter House basketball and volleyball competition held on 20th October, 2019 we fared very well. Though in Volleyball competition we bagged the third position, but in Basketball junior category, we emerged as winners. Astha Thakur received the ‘Best Player’ award in basketball junior category. The next most awaited event of the year – Annual Sports Day held on 2nd and 3rd of November, 2019 brought many proud moments. Our athletes once again proved their true sportsmanship spirit in every track and field event. Blue house won a number of medals in throws, javelin and races. We also won the Discipline trophy in the senior category and Marching Shield in the junior category. We also secured the second position in March Past, senior category as well as in P.T. Display which also won many hearts. It is well said by Robert Collier that ‘Success is the sum of small efforts repeated day-in and day-out’. Thus we were overall declared as the ‘Runners- Up’ I would like to thank our Principal Rev. Dr. (Mrs.) V. Eusebius who constantly motivated us by saying ‘We can and We will’ I would also like to convey my sincere gratitude to our House Mistress Mrs. S. Kapur, Asst. House Mistress: Mrs. A Thomas and others Arthur House Teachers Ms. R Lartius, Mrs. Paul, Mrs. Mishra, Miss. Ahmed, Mrs. Anthony and other teachers for their constant support and guidance, without whom the above mentioned achievements would not have been possible. Last but not the least I would also like to thank my Vice Captain, four prefects and all the participants for their sincere effort and dedication towards the house and for bringing victory to the Arthur House. At the end, I wish that as long as my Alma Mater lives, Arthur House must soar to the highest.